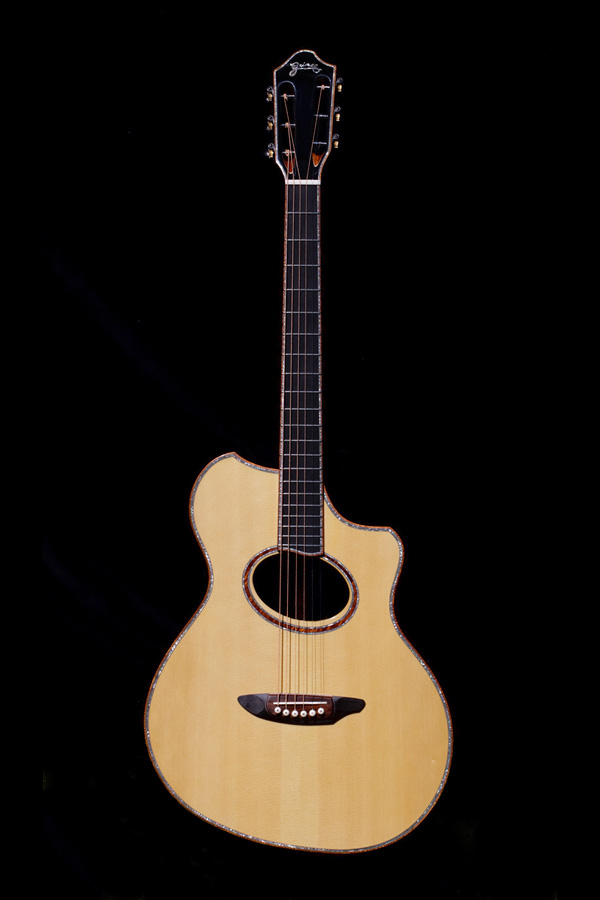 The Freehand Artist Model is an asymmetrical shaped flat top guitar, with the most select tonewoods available. The woods selected for this special model are the best of the best of my selected tonewoods for the past forty years. My choices for this guitar are master grade Carpathian Spruce and Brazilian Rosewood. Other woods for the top and the back/sides are also an option, such as Redwood, Cedar, African Blackwood, Cocobolo, curly German Maple, and Ziricote to name a few.
The asymmetric shape does not enhance or detract from the guitar’s tonality, but has a more comfortable and balanced feel. Slotted peghead, or solid peghead. A very thin border of ripple Green abalone trim around the body, soundhole, fingerboard and peghead is an option.
Available in all sizes, from “O” size to 16” body size.. Custom scale length, neck dimensions.

For an explanation of the double hole soundboard design, click here.

To see my “Soon To Be Available Ukuleles” please click here. 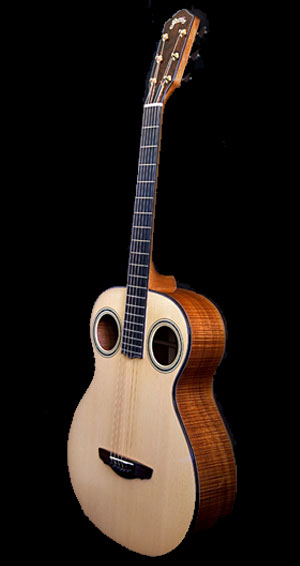 The double soundhole design does a few things better, or at least differrent, than a standard center soundhole guitar. In this design the traditional 3 7/8” – 4” round center soundhole, is replaced with two approximately 2 7/8” soundholes on either side of the fingerboard in the upper bout. The tonal changes most noticeable are the increase in sustain and the added richness to the bass. Having a larger area of soundboard that’s not interrupted by a soundhole, the double hole configuration allows for a fuller bass response, not unlike the difference between the richness of bass in a 15′ woofer compared to a 10″ woofer in a stereo system. Some of my customers use slack key tunings with a “C” in the bass, and this design is capable of better reproduction of those low tones. At the same time, the mids and trebles are maintained by a bracing pattern that is a close relative of the traditional “X” brace, but which uses another “X” up under the fingerboard. The lower bout “X” is slightly shifted to the treble side, which enhances the mids and trebles and further helps the bass by creating larger areas on the bass side. It also reduces the possibility of cancelation, or “washing” of the sound from side to side due to perfectly symetrical vibrating areas on the treble and bass sides.

The upper bout of a flat top guitar is an area that is relatively limited acoustically, especially in comparison with the lower bout. It is a perfect location for the soundholes for a number of reasons. 1) The resonating area of the lower bout is enhanced. 2) The close proximity of the bracing under the fingerboard (the upper “X”) and the sides of the guitar to the two soundholes makes it unnecessary to use heavy bracing to support the edges of the soundholes, unlike the center hole design, where the hole is surrounded by substantial bracing. 3) The sound of the guitar is more prominent to the player, since the bass side hole is closer to the ear.

To sum it up, the double hole design produces a full, warm bass response and overall increase in sustain. The player also hears a more immediacy of tone to his/her ear . It sounds almost like holding a standard guitar up closer to your ear while playing.

One drawback for the double hole design is that for those players with a deep, aggresive pick attack, its easier to scratch the soundboard under the strings with the pick, since there’s no hole there. Tonewise, the single soundhole guitars have a slightly more punchy quality to the tone with greater attack, while the double holes lend themselves to a warmer, rounder kind of response more suited to fingerpicking. I hear the word “open” used by players who pick up this guitar for the first time. 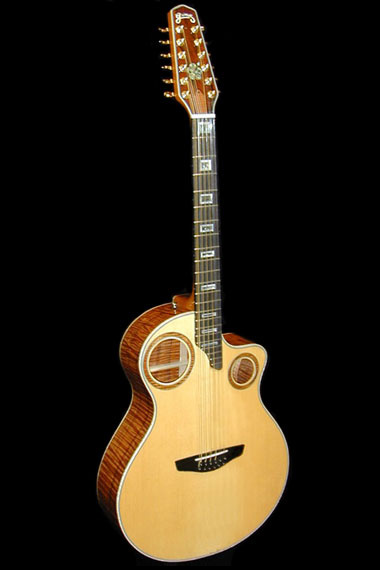 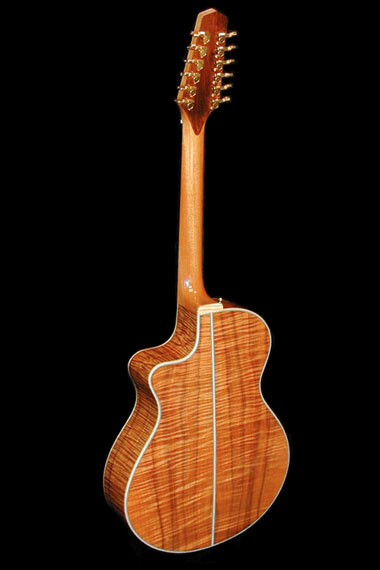 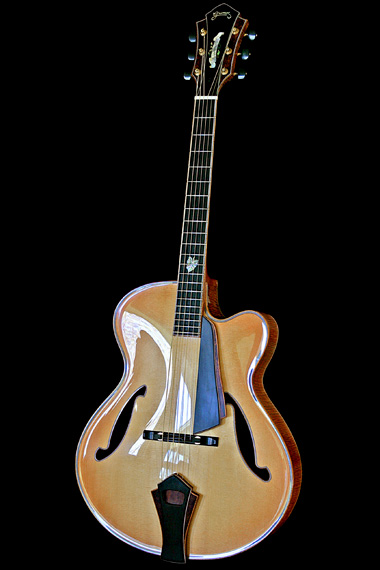 1999 was my 25th year of producing arch top instruments. To commemorate this milestone, I designed a special edition arch top guitar that originally was intended to be a limited edition guitar. The design proved to be popular and so I am still taking orders for this model. Perhaps I should rename it the 30th Anniversary Model??? This guitar features the ultimate in terms of workmanship and materials. Only the most special sets of wood that I have acquired over the years will be used to construct these guitars. Calton case included; pickup optional. Most custom specifications at no charge. Sizes: 16″, 16 1/2″, 17″, 18″. No-charge options include:

1) Custom sunburst finish or tinting in a variety of available shades. Finish pictured is “Light Parchment”. 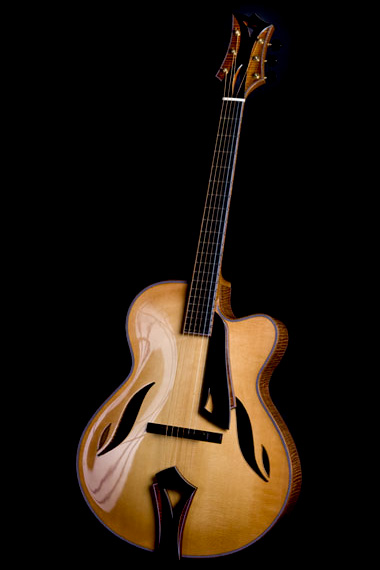 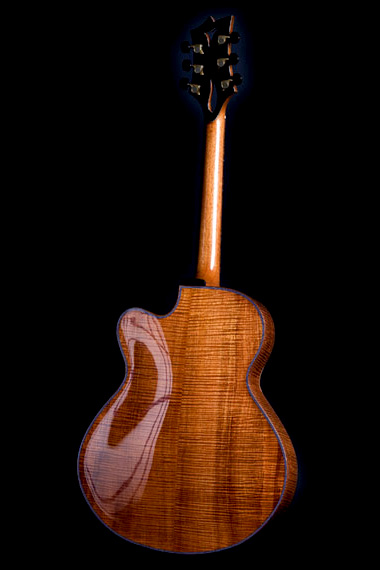 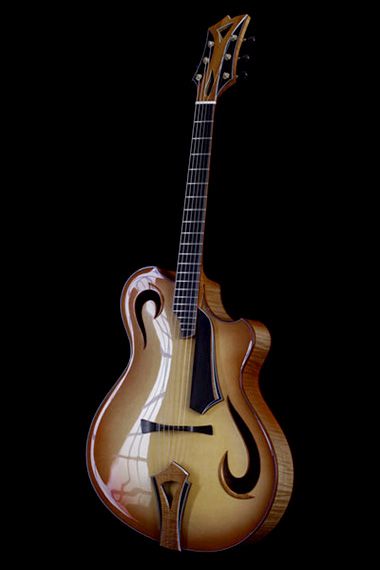 The 40th Anniversary Model is a departure from my more traditional arch tops in many ways.   I decided with this guitar to get away from symmetry to some extent. As you can see, the body is not symmetrical, and it features two “points” in the upper bout. In the “Pescatore” and “Camille” versions  of the 40th Anniversary, the location of the bass-side soundhole in the upper bout imparts a unique tone, in that there is more room on the bass side  between the bridge and the widest part of the body, and a larger area from neck to tail for the bass tones to develop. The large treble side soundhole helps produce a sweet and well pronounced high end.   The bridge is all ebony (no metal studs or adjusting wheels). This allows the bridge to weigh in at only 75% of the weight of a traditional arch top bridge. A lighter bridge has less damping effect on the overall tone and volume.  The action can be adjusted by loosening the strings, and sliding in a slightly lower, or higher saddle. Adjusting one side without adjusting the other is accomplished using a fitted, tapered ebony shim. Since the arch top should need adjusting only on infrequent occasions, I felt that the tonal improvements were worth the small inconvenience in adjustments.Traditional adjustable ebony arch top bridge available on request. 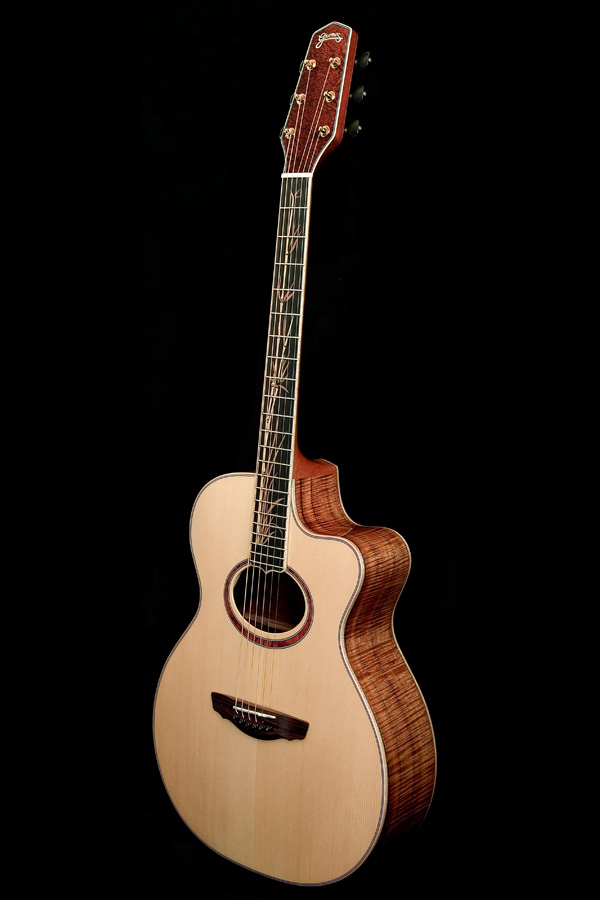 The LC model was developed in collaboration with the great jazz guitarist Larry Coryell. He needed a flat top guitar that had a strong, clear midrange and high end response, without boominess in the bass. Furthermore, it had to have a loud, full acoustic tone, but still be capable of amplification with a piezoelectric pickup with better feedback control. Larry wanted to be able to perform on stage in a group with the guitar, and also be able to record with it in the studio. By using a combination of “X” and parallel bracing, as well as an elliptical soundhole, the LC enhances the power of the mid and upper ranges of the tonal spectrum. 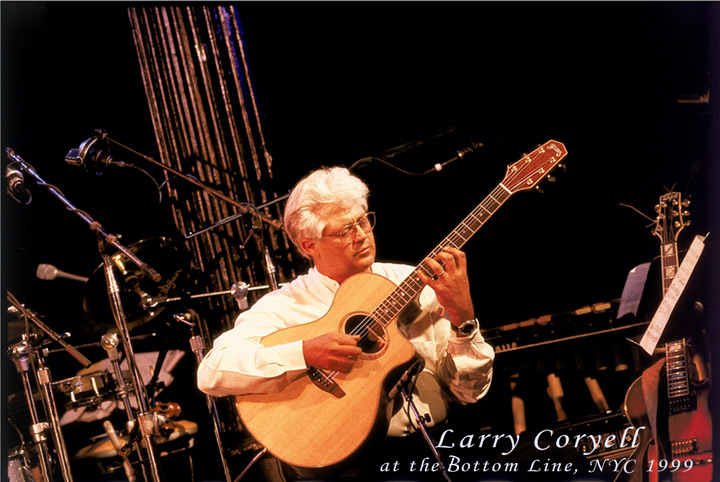