Music and woodworking are two very different types of “performing” arts. Being both a woodworker and a working musician in 1972, I found myself fascinated by the prospect of combining these two professions. After studying with a violin maker and working in the instrument repair trade, I set up my own shop in Seattle, Washington, USA and began making arch top mandolins. For the first two years I made mandolins exclusively, subsidizing my new venture by doing repairs on all types of string instruments. When I was able to increase production of new instruments and get them into the hands of some good players, I was finally able to devote myself fully to building new instruments.

1982 also was the year I moved my shop from Port Townsend, Washington to its present location in Kula, Hawaii. At approximately 4000 feet on the dry, leeward slopes of Mt. Haleakala, I found the perfect location to build instruments. Without the seasonal fluctuations in temperature and humidity, climate stability and conditioning in the shop were made much easier.

After this move I found myself greatly influenced by the local music and guitar players. In 1989, in collaboration with the master slack key artist KEOLA BEAMER, I designed a double soundhole flat top “slack key” guitar. Similar in some ways to earlier designs by luthiers George Gilmore, Donald Merianthal, and Douglas Ching, this design splits the soundhole into two smaller holes and moves them to the sides of the fingerboard, allowing a larger area of the top to vibrate, producing deeper basses and greater sustain. This design works especially well for smaller body sizes such as the “OM” size because the clearer treble responses of these smaller guitars is complimented by this “enriched bass” soundboard. Because of the location of the bass side soundhole, this design also makes the sound of the guitar more prominent to the player. The two models using this design are the Beamer and Kaulua models.

In 1991, I teamed up with musical innovator NED STEINBERGER to produce an experimental flat top guitar in which the soundboard is not put under tension, as it is in standard flat top, classical, or arch top guitars. Using a unique bridge system, the “stress free” guitar directs the string tension to a tailpiece, allowing much lighter braces to be used without fear of an exploding or imploding soundboard. This system makes it possible for the top to vibrate more freely, producing a loud, full, open tone.

Grimes Guitars is a relatively small shop producing instruments slowly and meticulously by hand. Close attention to detail, such as tuning top and back plates, often missing in production guitars, is fundamental in each instrument. The advantage to building a few instruments at a time from start to finish is being able to control the response and tonal characteristics as each instrument progresses. This process takes time, and a commitment to achieving the fullest tonality and vibrance the wood has to offer. About twenty guitars are produced in the shop annually.. 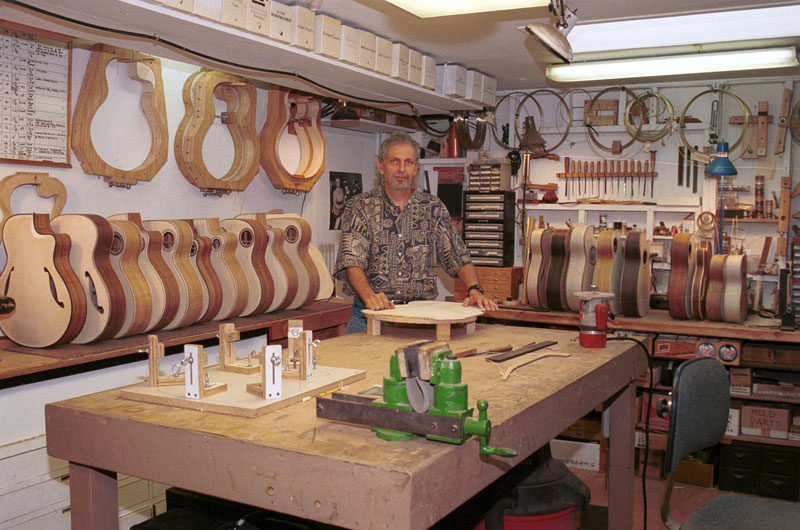 Maui’s Music Man: Steve Grimes makes music as a songwriter and – literally – as an instrument builder.